A contingent of eight scientists from different disciplines led by Dr Narendra Pratap Singh, Director, NIASM visited BARC, Mumbai to participate in DAE- BRNS Life Science Congress on “Frontiers of Sustainable agriculture” on 26th - 28th of April 2018. While the Director chaired the session on “Crop Breeding for Biotic and Abiotic Stresses”, other scientists used this opportunities to display the research wok being carried out at NIASM in the form of posters. Two of the scientists also delivered the talk highlighting the facilities for research on plant phenotyping and conservation agriculture. Director and scientists of NIASM had a brief interface meeting with BARC to highlight areas of common interest and future collaboration. This meeting was attended by Dr V.P. Venugoplan, Associated Director, and scientists working on mutation breeding and physiology of ground nut, wheat and pulse crops in the Bioscience Group at BARC. Dr Narendra Pratap Sigh highlighted short term interventions to show the impact of collaboration between the institutes by demonstrating the popular cultivars of different crops in farmers field in and around NIASM. He also pointed at scope for engaging waste decomposition system developed by BARC in villages and municipalities as this is being repeatedly highlighted. Other areas of research discussed for collaboration included use of phenotyping platform of NIASM for characterising drought and heat tolerance in crops being improved at BARC. It was also suggested that mutation breeding should be extended to spice crop such as coriander and medicinal plants such as salvia where seed propagation is major constraint. Dr Venugopalan suggested finalizing the MoU after reciprocal visit by BARC scientists to NIASM. 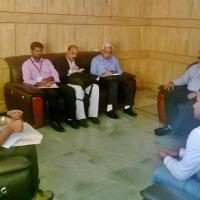 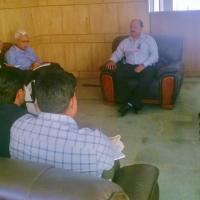